Living The Dream – A Supercar Tour Through Italy By Ryan Schnell

“We don’t sell cars, we sell dreams,” so says Ferrari CEO Luca di Montezemolo.  Dreaming is what I was doing for the 40-minute Eurostar train ride from Florence to Bologna, where my wife and I met up with our tour guide for the day.  My thoughts fixated on the exotic machinery that I was about to see and feel first hand.  The agenda for the day had me grinning from ear to ear as I read it over and over – 1) Test drive a Ferrari. 2) Visit the Ferrari Museum. 3) See where Paganis are built. 4) Visit the Lamborghini factory. 5) Wipe drool.

My boyhood dream of driving an Italian supercar was about to become reality.

We started the day at Push Start Marenello, a company set up right in the backyard of the Ferrari factory that specializes in allowing car enthusiasts to drive their choice of nine Italian supercars on various tours around Marenello.  As we pulled into the lot, bright colored Lamborghinis and Ferraris greeted us.  This was definitely not your typical rental car agency.  I had a reservation set up to test drive one of these beasts, but making things more exciting is that I didn’t have a car picked out yet.  I surveyed the lot like a kid in candy store, progressively wanting each car more and more as I walked by.  As I finished signing all the necessary legal paperwork the nice lady behind the counter asked which car I would like to drive. “Is the 430 Scuderia available?” I asked. It was, and she informed me that Luca would be my co-pilot for the test drive.

Luca and I strapped our selves into the four-point harnesses and I pressed the starter button to fire-up the 4.3-liter V8 — the soundtrack for our test drive. Luca was no ordinary co-pilot, having worked as a Ferrari R & D test driver for 12 years, helping to develop every Ferrari from the 355 model to the current 458.   He informed me that the only accident that had ever occurred during a test drive was when a previous customer decided to make friends with a guardrail, driving the very same car that I was about to experience.  No pressure.

Driving an arrest-me-yellow Ferrari F-430 Scuderia through the streets of Maranello is like hearing the Ten Commandments directly from the man upstairs himself.  Here I was at the wheel of a 510-horsepower special edition Ferrari, driving a stone’s throw away from where it was built and doing my best to terrorize the narrow two lane roads surrounding the factory.  Each time traffic momentarily cleared, I planted my right foot down and watched the shift lights frantically light up before I clicked off another gear change.  I was in automotive Heaven.  The only thing that could possibly top it would be testing its limits on Ferrari’s on-site testing track – Circuit de Fiorano.  And since my last name isn’t Alonso or Schumacher, that’s not happening anytime soon. Next we headed to the Pagani Factory, located in the small town of San Cesario sul Panaro.  Pagani was founded in 1992 by Argentinian Horacio Pagani, a former composites/carbon fiber specialist who worked for Lamborghini in the 1980s.  When you step through Pagani’s entrance the first thing you see is a Zonda Cinque Roadster – a jaw-dropping supercar with the most insane purple-over-carbon fiber paint job I’d ever seen.  To call a Pagani rare is a bit of an understatement.  The planned production run of the Cinque Roadster was five cars at a price tag of $1 million apiece.  The factory itself produces around 17 cars a year.  And it’s not so much a factory as a racing workshop, one that includes an assembly area that can handle around three cars at a time and a rear bay with multiple autoclaves that are used to produce the carbon fiber parts that are found all over each Pagani.

Parked next to the Cinque Roadster in the showroom was the track-only, $1.8 million, 750 HP Zonda R, which served as the companies’ final edition supercar within the Zonda lineup.  Everywhere I looked I saw beautiful weaves of carbon fiber –paddle shifters/rear diffuser/mirrors/intake/bodywork.  That all adds up to a car that weighs a feather-like 2,358 pounds, which helps the supercar hit 0-to-60 mph in a neck-snapping 2.7 seconds.  Take one look at it and it’s clear that this monster was designed to be the ultimate track day supercar.  You can’t help but stare. As we departed the Pagani headquarters I wondered how this day could possibly get any better. I was in luck.  For our final stop of the day we headed to Sant’Agata Bolognese, home of legendary supercar maker Lamborghini.  As we made our way towards the on-site museum we stumbled upon a brand new Aventador with none other than Valentino Balboni standing next to it.  Balboni is Lamborghini’s legendary test driver who has driven nearly every Lamborghini produced for the past 40 years.  In 2009, he was honored by the company when they announced a special edition run of 250 Gallardo LP550-2 “Valentino Balboni edition” supercars.  Oh, and he also has a local highway named after him with an accompanying gentleman’s agreement with the local police.  I quickly introduced myself and started talking cars as we snapped a few photos together.  I could not have scripted a better “Welcome to Lamborghini” myself.

Chiara, one of Lamborghini’s PR specialists, gave us a tour of the factory and museum.  We started on the factory floor, getting an up close look at each station of assembly for Lamborghini’s two models – the Aventador, which features a ground breaking, all carbon fiber monocoque, and the Gallardo.  Current production levels have six to seven Gallardos and three Aventadors going out the door each day.  Prospective buyers can customize their car in any color combination they desire – my favorite being the new matte silver, white or black.  Watching the factory workers craft these supercars by hand, with the utmost attention to detail, gave me new-found appreciation of how much craftsmanship goes into these Italian beauties.

Next up was a stop at the museum.  Opened in 2001, the museum has two floors of significant cars and displays that highlight the company’s history, dating back to 1963, when the company was founded by manufacturing entrepreneur Ferruccio Lamborghini.  The collection includes the very first and last Countach built, 350SV, Miura, Diablos, assorted V12 F1 motors and a bright yellow Murcielago that was hung from a wall.  It’s not every day you see a $250,000 supercar hanging from a wall, but this is Lamborghini and they do things bigger, better and faster than everybody else. For a fitting end to the day, my wife and I were led outside where we met up with one of the factories test drivers to get a ride along in a bright orange Gallardo LP570-4 Spyder Performante.  That’s a mouthful in Italian.  I’ll give you the cliff notes – sex on wheels.  We took turns getting a triple digit, roller-coaster ride on the various two-lane roads surrounding the factory.  Ferrari’s CEO was right, driving these supercars is an experience that most people will only dream of.  I was just lucky enough to live out mine for a day.

For more information on renting an exotic Italian supercar at Push Start Maranello, contact them at www.pushstart.it or by phone at (39) 0536 945888.

If you are planning to visit the Lamborghini factory or their museum, you can find more information at www.visit-lamborghini.com. 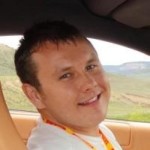